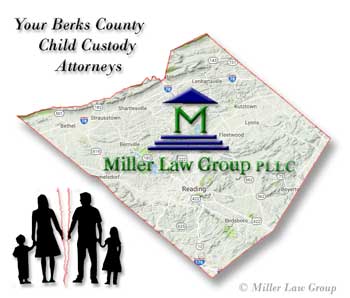 Divorce
Our expert Divorce Attorneys will help you decide which options are best for you based on 40 years' experience practicing PA Divorce Law in Berks County.

Division of Property
Our experienced Property Division Attorneys will make sure you get the best Equitable Distribution of Marital Property.

Spousal Support / Alimony
We'll make sure you have money to live will you're separated, to defend yourself in your divorce and to secure your long-term financial well-being.

Child Custody
Like you, our Child Custody Attorneys put the children's well-being first while protecting your rights to be with them.

Child Support
Like you, our Child Support Attorneys put the children's well-being first while protecting your rights to be with them.

Child Custody is one of the most intensely emotional areas of Family Law. We totally understand that you're terrified of not having access to your children. We know that you and most spouses involved in Child Custody disputes truly want what is in the best interest of the children.

There are two categories of Child Custody:

Pennsylvania judges make child custody decisions based upon the best interests of the child. Judges consider factors that impact the child physically, intellectually, morally and spiritually.They use 16 factors shown below to make that determination. After you read over them it's obvious that the factors are not always clear and extremely subjective. So you need a proven Child Custody Attorney with experience working in Berks County and with the judges likely to handle your case. Your attorney will explain each factor in plain English while explaining their meaning as they apply to you.

Miller Law Group Child Custody Attorneys have 40 years' experience and experts in PA Child Custody Law. When you meet with us we:

I will listen carefully while you explain your family situation. My experience as an expert Family Attorney and handling Child Custody cases in Berks County enables me to ask the right questions to further understand your circumstances. I'll then explain where you stand in regard to the Child Custody factors using plain English. You'll clearly understand what comes next.
(a) Factors.--In ordering any form of custody, the court shall determine the best interest of the child by considering all relevant factors, giving weighted consideration to those factors which affect the safety of the child, including the following:

(1) Which party is more likely to encourage and permit frequent and continuing contact between the child and another party.

(2) The present and past abuse committed by a party or member of the party's household, whether there is a continued risk of harm to the child or an abused party and which party can better provide adequate physical safeguards and supervision of the child.

(2.1) The information set forth in section 5329.1(a) (relating to consideration of child abuse and involvement with protective services).

(3) The parental duties performed by each party on behalf of the child.

(4) The need for stability and continuity in the child's education, family life and community life.

(5) The availability of extended family.

(7) The well-reasoned preference of the child, based on the child's maturity and judgment.

(8) The attempts of a parent to turn the child against the other parent, except in cases of domestic violence where reasonable safety measures are necessary to protect the child from harm.

(9) Which party is more likely to maintain a loving, stable, consistent and nurturing relationship with the child adequate for the child's emotional needs.

(10) Which party is more likely to attend to the daily physical, emotional, developmental, educational and special needs of the child.

(11) The proximity of the residences of the parties.

(12) Each party's availability to care for the child or ability to make appropriate child-care arrangements.

(14) The history of drug or alcohol abuse of a party or member of a party's household.

(15) The mental and physical condition of a party or member of a party's household.

(16) Any other relevant factor.

(b) Gender neutral.--In making a determination under subsection (a), no party shall receive preference based upon gender in any award granted under this chapter.

(i) the amount of personal contact between the child and the party prior to the filing of the action;

(ii) whether the award interferes with any parent-child relationship; and

(iii) whether the award is in the best interest of the child.

(2) In ordering partial physical custody or supervised physical custody to a parent's parent or grandparent who has standing under section 5325(3), the court shall consider whether the award:

(i) interferes with any parent-child relationship; and

For most people, having access to your children is the most important thing in the world. Why would anyone risk something so important by choosing the lowest cost Child Support Attorneys? Obviously low cost legal services, like everything else, are low cost for a reason. Are they really going to spend the time required to get the get the best custody arrangements? Are they going to take the time necessary to fully understand your family's situation? Are they going to take the time to ask the necessary questions or even know what to ask?

Does my former spouse have visitation rights if I have Sole Legal Custody?